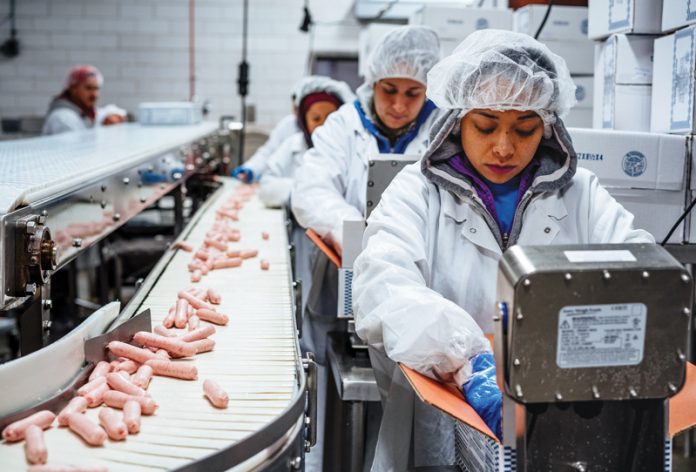 Phil Peters wasn’t planning on joining the family business. With a degree in architecture from the University of Detroit Mercy, his plan was to design buildings. Instead, he joined his father, uncles, and siblings as part of the growing breakfast meat empire the family is building in Eastern Market.

Although Detroit Sausage Co. is celebrating its 90th anniversary, Peters’ grandfather, Philip Sr., didn’t acquire the business until the early 1960s. At that time, it was tiny. “They were just a mom-and-pop shop,” Peters says. “They were making one kind of sausage and doing everything by hand.”

Since then, Detroit Sausage Co., located on the north side of Eastern Market, has grown, making hundreds of thousands of pounds of sausage and serving restaurants nationwide. In addition to breakfast sausage, they also make chorizo, Italian sausage, and chicken sausage.

Competition in the meat business is steep, and the family likes to keep their local clients confidential — although, according to Peters, if you’ve eaten breakfast at a local Coney Island eatery, you’ve probably had his family’s product.

Peters’ father, Anthony, left high school to take over the company as president when Philip Sr. became terminally ill in 1978. “I’m not sure that it was his plan to work in the meat business,” Peters says of his father, “but when grandpa died, he was ready.”

Anthony, along with brothers Phillip Jr. and Charlie, grew the business into what it is today. In 1998, Anthony purchased LKL Packing (also in Eastern Market) and Smith Meat Packing, located in Port Huron.

Today, the three companies operate in four buildings that, combined, make up almost 70,000 square feet of space and generate annual sales of $40 million. Anthony is still president of Detroit Sausage Co., but brothers Philip Jr. and Charlie are running things, while Phil and his sister Rachel handle the day-to-day operations at LKL Packing, and son, Anthony Jr., is learning the business and preparing to run things at Smith Meat Packing.

“There was a time, in the 1980s, when my dad would talk about (Eastern Market) being a tough place to work — but it was the only place you could go to get meat,” Peters says. “It was the only place to do this kind of business. And as the other meat packing companies got bigger, you either grew or you died. We were lucky to grow.”

Peters, whose wife, Nancy, is pregnant with the couple’s first child, a boy, says he isn’t going to push his son into the business. “I think I’ll do what my dad did,” he says. “I’m going to bring him around, but I’m not going to force him. I want him to know what we do, and if he’s interested, it will be here for him.”