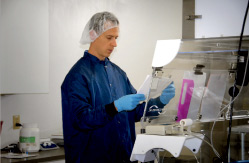 Away from the office, many business executives live their lives in high society. A CEO can have his home custom-built, his suit perfectly tailored, his stationery specially designed. And if you ask Scott Popyk, prescription drugs are no different.

Popyk, president of Health Dimensions Specialty Pharmacy, a compound-drug company based in Farmington Hills, makes his living tailoring medications to the particular needs of particular patients. Seldom can a patient go to his local druggist and request a medication in an unusual dosage, strength, or form (for example, requesting that a capsule be converted into a topical cream).

That’s where compound pharmacies such as Popyk’s come in. Composing just 5 percent of the pharmaceutical market, facilities such as his are rare indeed. Including Health Dimensions, the Pharmacy Compounding Accreditation Board has certified only 61 pharmacies in the United States.

Despite Health Dimensions’ relatively small niche in the industry, its revenue has been growing at an annual rate of 10 percent. In fact, the business has flourished since Popyk started it in 1996, five years after he graduated from Wayne State University with a bachelor’s degree in pharmacy.

The success of Health Dimensions, Popyk says, can be attributed to the facility’s quality. Each laboratory, including a general lab, sterile lab, and a capsulation lab, is designed to ensure maximum efficacy and safety. He says the lab has also adopted safety procedures that far surpass what’s required by both the PCAB and the standardizing agency United States Pharmacopeia. Health Dimensions also offers consultation services to ensure that each prescription matches the specific needs of its patients.

The company’s leads all come by referral, often when a doctor or patient has exhausted other options. “We’re really a pharmacy of  last resort,” Popyk says. “By the time patients get to us, they want to pay for excellence.”

In the coming months, Popyk plans to move his company and its 25 employees to a more high-profile location in metro Detroit. The new facility, he says, will have a “Zen-like feel” on the sales floor, emphasizing self-health management with herbal products, in addition to its custom medications.

Arguably the largest compounding pharmacy in Michigan, Health Dimensions is gearing up for yet more growth. “We’re really a hometown success story,” Popyk says. “We’re here to do what’s best for the patient.”