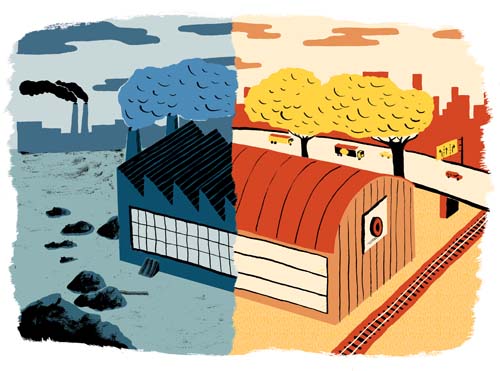 If there’s one altruism about diversification, it’s that it doesn’t work for everyone.

Kmart Corp. failed miserably when it acquired brand retailers of books, fashion, and hardware; the buying spree helped push the retailer into bankruptcy. In hindsight, Kmart’s management team should have spent money to modernize its own stores.

On the flip side, for Detroit-based Quicken Loans, diversification has brought nothing but success. From its start facilitating residential mortgages, the company branched into sports (Cleveland Cavaliers), entertainment (Quicken Loans Arena), security (Protect America), and health care (Cellerent), among other pursuits in real estate and gaming.

Now, Chris Brochert, a partner at Lormax Stern Development Co. in West Bloomfield Township, is out to harness Quicken Loans’ success. Lormax Stern, a developer of shopping centers across Michigan and in the Midwest, is betting it can apply its expertise developing stores and restaurants on formerly contaminated properties with aging industrial facilities. But the stakes are high.

Most recently, the company acquired a shuttered stamping plant in Wyoming, near Grand Rapids, from Motors Liquidation Co., the entity formed to sell the unwanted assets of General Motors Co. following its 2009 bankruptcy. Rather than market the existing complex to potential manufacturers, Brochert worked with public officials to level and recycle the 2-million-square-foot facility.

The project is one of the first of its kind in the country involving Motors Liquidation.

“We had a shared vision of demolishing the plant,” says Curtis Holt, Wyoming’s city manager. “The plant had different roof heights which precluded redevelopment, it was old (built in 1936), and it had an enormous amount of steel. Plus, the annual cost to maintain the facility was $2-million, and we didn’t know who was going to pay for that.”

On the plus side, the 90-acre parcel is adjacent to rail lines and a major freeway. It also has access to industrial-grade electric, water, and sewer lines. “It’s one of the most attractive industrial sites in the Midwest, and even more so when we finish demolition (in 2012),” Brochert says. “Plus, you have a community eager to see it redeveloped.”

The Michigan Economic Growth Authority, a quasi-public development agency, committed $8.5 million to the cleanup effort, while Motors Liquidation will be responsible for environmental remediation. In addition, The Right Place Inc., a nonprofit economic development group in Grand Rapids, is actively marketing the site to advanced manufacturers in the areas of automotive, alternative energy, medical, defense, and food processing.