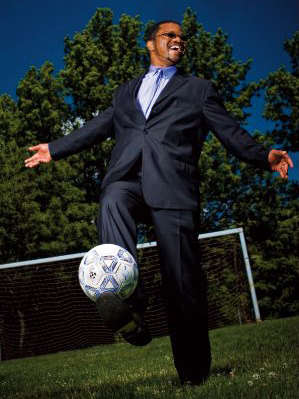 An accomplished soccer player, having starred as a defenseman for Nigeria’s senior national soccer team, IT consultant Pius Oleh longed for the day when he could help guide a team to an Olympic or World Cup championship. But not from the field. Rather, Oleh, 37, started a sports-management company that assists soccer coaches and managers, as opposed to players. Most recently, he attended the 2008 Summer Olympics in Beijing, where the Nigerian team won a silver medal.

“Just like anyone in upper management would work with a business coach to improve their skillset, so, too, do soccer coaches need professional training,” says Oleh, owner and chief talent officer for Tech2Sports Talent Management in Grosse Pointe Farms. Servicing leagues across the globe, including Argentina, England, Japan, and Brazil, Oleh helps coaches and managers map a winning strategy, set up motivational-speaker services, and provide organizational and training resources.

“The business side of sports, especially soccer, requires someone who has played at the national level who understands how to assist management with tactical and organizational skills,” says Samson Siasia, coach of the Nigerian Olympic soccer team. “Pius gets the job done.”

The most popular sport in the world, soccer is a strategic game requiring snap decisions. “I also help teams find coaches, or I work with coaches who are looking to move to another team,” says Oleh, who holds an MBA from Alabama A&M University and a master’s in computer-information systems from the University of Detroit Mercy. Already, Oleh is making plans to help guide a team to the 2010 World Cup in South Africa. “A few teams I work with could be in the Finals.”