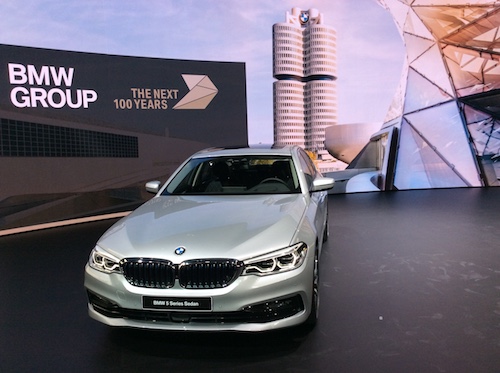 “The seventh-generation BMW 5 Series is the most dynamic and innovative yet, without a doubt and will continue to set standards for years to come,” BMW executive Ian Robertson told DBusiness.

The M550i xDrive — a four door sports car and business sedan — is equipped with a TwinPower turbo engine, a rear-biased intelligent all-wheel drive system, and M Performance-specific suspension set up. The M550i xDrive boasts a 456-horsepower engine and can go from 0-60 miles per hour in four seconds.

The BMW 530e iPerformance will be available as a plug-in hybrid variant to the latest vehicles in the 5 Series model range, which Robertson also told DBusiness is part of the company’s commitment to industry-wide innovation. It will be the company’s fourth iPerformance model released in the U.S. and the first to offer rear and all-wheel drive, an added safety and performance feature.

“The success of our electrified cars so far shows our commitment and we intend to remain at the forefront of electric mobility,” Robertson adds.

BMW also announced its commitment to putting 100,000 additional electrified vehicles on the road in 2017, the same number the company supplied during efforts the past three years.

The 5 Series sedan has been a cornerstone of the BMW brand since its introduction in 1975 and is projected to be on the market in the next few months.