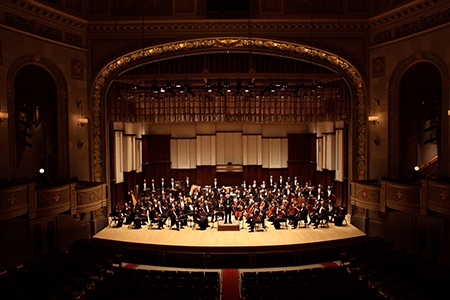 The Detroit Symphony Orchestra will began airing its webcast series Live From Orchestra Hall on PBS.org for the first time next week. As part of a new contract signed last month between the DSO and members of Local 5 of the American Federation of Musicians, more stationary cameras and technology will be added to improve viewer content.

“This partnership is the newest example of how the power of public media can be a tool for helping important cultural organizations to fulfill their missions,” says Rich Homberg, president and CEO of Detroit Public Television. “We are proud to have this opportunity to showcase the top-tier talent Detroit has to offer to a national and potentially worldwide audience.”

In 2011, the DSO became the first orchestra in the world to offer a series of free live webcasts for a global audience by offering Live From Orchestra Hall on its website. Since then, the program — now watched in more than 80 countries — has expanded to include mobile viewing, partnerships with classical streaming websites in other countries, and a series of digital-only albums available for streaming and download.

Under the PBS arrangement, a new DSO concert will stream on-demand for seven days on PBS.org; a PBS mobile app, PBS apps for Apple TV, Roku, and Xbox.

The first episode, featuring a performance of Beethoven’s Symphonies 4 and 5 conducted by DSO Music Director Leonard Slatkin, will air at 8 p.m. Thursday. It will remain available through Feb. 27.

“The DSO’s webcasts enable our vision to become more accessible and better serve audiences locally and around the world,” says Anne Parsons, president and CEO of the DSO. “We are so grateful to PBS for this new partnership.”