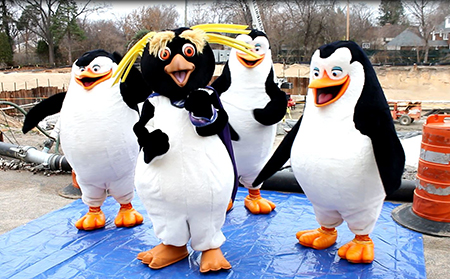 Hoping to bring attention to the emerging Polk Penguin Conservation Center, the Detroit Zoo partnered with “characters” from the new movie, Penguins of Madagascar, to film a dance routine at the center’s construction site. The filming took place on Tuesday for potential inclusion in creating the world’s longest music video.

“The center is going to be the largest penguin facility in the world once it’s open (in late 2015),” says Jennie Miller, a spokeswoman for the Detroit Zoo. “So when we heard that the penguins (characters) were in town for the Thanksgiving Day Parade, we thought bringing them in with our own penguin Zooperhero mascot would be a great way to celebrate penguins as the movie comes out today.

As part of a social media campaign to promote the new DreamWorks film, the production studio created a choreographed dance routine set to the movie’s original song, “Celebrate,” by Pitbull. The public is encouraged to submit 15-second videos via Instagram, using the hashtag #penguinshake, in an attempt to create the world’s longest music video.

“If you go to their website (penguinshake.com), you can already see other peoples’ submissions looping in, so once we add ours, hopefully they’ll pick it up,” Miller says.

It took only two takes for the penguin characters — Skipper, Kowalski, Private, and Zooperhero — to get the dance down, says Miller, noting that the contractors working on the center are visible in the background of the video.

To watch the extended cut of the Detroit Zoo’s submission, see below or click here.