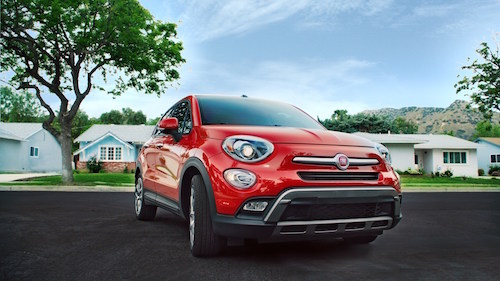 The Auburn Hills-based Fiat brand has launched a new television and online marketing campaign, called A Whole New Way to Look at Fiat, for the Fiat 500X crossover that consists of six videos showcasing various camera and production techniques.

“We needed to change the conversation and do a fundamental shift in strategy to highlight the specific attributes of the Fiat 500X crossover, including its larger size and 4×4 capability of the model,” says Olivier Francois, chief marketing officer at FCA Global and head of the Fiat brand.

Using a forced perspective camera technique, the campaign’s Dollhouse and Not a Toy Car videos highlight the room for five people and the cargo space in the Fiat 500X crossover.

The use of split screen for the Two for One video showcases the vehicle’s duality, while Take it for a Spin, which was shot with a GoPro, gives viewers 360-degree views of the 500X’s ability to maneuver on various terrains.

Around the World was shot using four simultaneous cameras and a custom rig attached to the car, with footage providing depth of the surroundings.

The videos, created in partnership with FCB Chicago, were directed by Jared Eberhardt and produced by Partizan. The first five spots are now viewable on television and online. A sixth video will debut later this month.

In North America, the Fiat 500 was introduced in March 2011 and was followed by the Fiat 500c (Cabrio), the high-performance Fiat 500 Abarth and Abarth Cabrio, the fully electric Fiat 500e, the five-passenger Fiat 500L, and the all-wheel-drive 500X crossover.