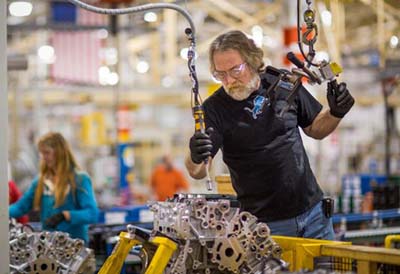 General Motors today announced it will invest more than $356 million in a new engine line in Flint and driveline and powertrain components in Saginaw and Grand Rapids, creating more than 50 jobs and helping to retain nearly 500 positions. The investment is part of $1 billion GM plans to invest in Michigan by 2030.

“Today’s announcement that (GM) is investing in Saginaw, Flint, and Grand Rapids proves the company wants to retain a strong presence in Michigan,” says Gov. Rick Snyder. “The fact that GM is committing to invest $1 billion by 2030 here is even better news. It’s a globally competitive environment, and GM’s announcement shows it appreciates that Michigan is a comeback state with a skilled work force and exciting expansion opportunities.”

Snyder says the Michigan investment announcement comes on the same day as an amended agreement between GM and the Michigan Strategic Fund under the Michigan Economic Growth Authority tax credit program.

“These investments will better position GM and its work force to produce high quality engines and components for customers who demand greater fuel efficiency and performance from our vehicles,’ says Bill Shaw, manufacturing manager of GM North America.

Shaw says details related to the engine programs and associated vehicles will be released at a later date.