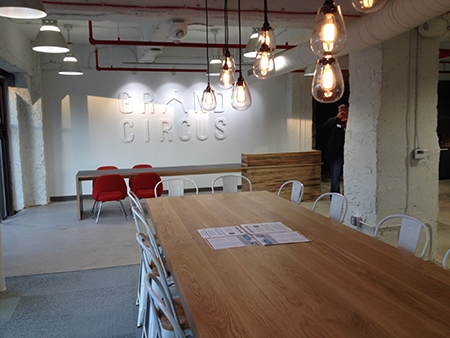 Eleven metro Detroit-based startups on Thursday will compete for the ultimate startup opportunity: the chance this spring to deliver their business pitch to investors at Google’s Silicon Valley-based headquarters.

During the event, held at Grand Circus’s home base within Detroit’s David Broderick Tower, a panel of local judges — Martin Dober of Invest Detroit, angel investor Terry Cross, Jeff Barry of Plymouth Ventures, and Josh Lin of RPM Ventures — will evaluate each startup based on a three-minute pitch and two-minute Q&A session. From there, the judges will pick the top three contenders, and pass the list along to Google, where reps decide how many of the three will make it to the main event in April in California.

In Mountain View, Calif., the selected Detroit area startup will be joined by others selected through the North America Tech Hub Network, of which Grand Circus is one of nine national members.

As Google for Entrepreneurs partners with the hubs to help encourage local start communities, the April event “focuses on highlighting top companies located outside areas with highly developed venture capital markets.” For this reason, the demo day will not include startups from San Francisco-Silicon Valley, New York City, Boston-Cambridge, or Los Angeles.

Rocchi says that Google is not committed to any funding through these pitch events, but notes the demo day offers a good opportunity to gain the attention of some of the most prominent investors in Silicon Valley.

Last year, Detroit-based iRule was selected to move on to Google’s Demo Day in California, where judge and AOL founder Steve Case ultimately decided to invest $100,000 in every startup that had made their pitch. Case will also participate in this year’s April event, although Rocchi says Google has been careful to keep things under wraps. “We’ll just have to wait and see,” he says.

For more information about the event, to be held from 5 p.m. to 7 p.m., visit grandcircusgoogledemoday.com.