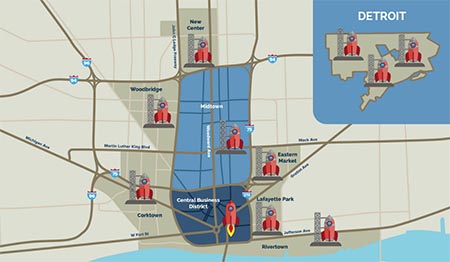 Rocket Fiber, a new gigabit Internet network based in downtown Detroit that aims to deliver digital speeds 100 times faster than the average residential connection, has launched its website and will soon move to a new headquarters at the northwest corner of Woodward and Clifford (1505 Woodward, across from the new John Varvatos store).

As part of the rollout, the company, which was launched earlier this year and is currently located in the Compuware Building, is asking potential business and residential subscribers in metro Detroit to request the service. While downtown customers will be the first to receive fiber connections, the company will expand to other neighborhoods like Midtown, Corktown, and Woodbridge based on demand.

“We encourage people to sign up, and we could expand into the suburbs if enough people request the service in a given area,” says Edi Demaj, co-founder and COO of Rocket Fiber. “We launched our website on Monday, and we’ve already received hundreds of signups. We are literally adding employees every day.”

The company, which is co-founded by Demaj, Dan Gilbert, Marc Hudson, and Randy Foster, is setting up a data center in Detroit. While the exact location has not been finalized, the plan is to begin service in the fourth quarter. Demaj says the data center will be separate from a similar facility Gilbert will soon start in Corktown along Rosa Parks Boulevard.

Rocket Fiber’s website, which includes an interactive map of Detroit, says the service can deliver an iTunes album in one second, a Blu-Ray version of Star Wars in 4.3 minutes, and backup a hard drive to the cloud in 33 minutes. The service will cost around $70 per month.