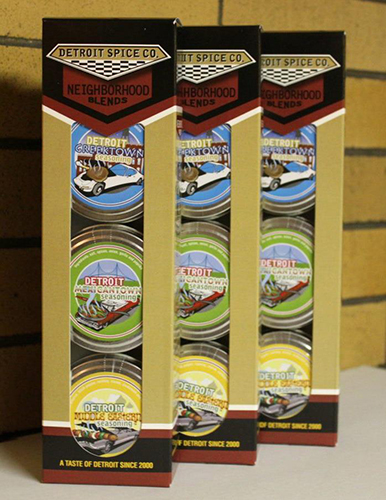 “We were probably in 75 to 80 stores (before the acquisition),” says Eric Brown, co-founder of Street Eatzz. To date, the business has products in 165 specialty retail stores.

“I’m really interested in getting into the gift basket business, and items packaged around Detroit are pretty popular,” Brown says.

However, where Brown ultimately sees the company’s growth potential isn’t just in its product line, but its services. Street Eatzz is a co-packer — meaning the company manufactures, bottles, distributes, and helps market products — for other Michigan businesses, including Backwoods Mustard, Easy Peasy Chicken Marinade, and Maria’s Salsa, he says.

“A typical co-packer would require a food customer to (order) somewhere between 150 to 200 cases at a time,” Brown says. “Well, if you have two to three products, that’s anywhere form 500 to 600 cases you need to produce at once — which can be very expensive.”

Street Eatzz is what Brown describes as a micro co-packer, which offers small runs, often just 20 to 30 cases at a time. “It helps match up the food entrepreneurs’ cash flow and sales with production,” he says.

Brown says Street Eatzz began offering its co-packing services in October, and has plans to add more clients this year.