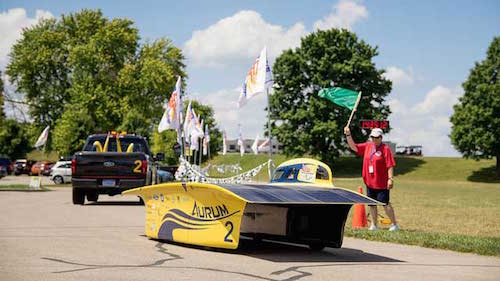 With a time of just under 11 hours, The University of Michigan Solar Car team, a student organization that designs, builds, and races solar vehicles, won the 2016 American Solar Car Challenge for the sixth consecutive time in late July. This is the ninth time that the university’s team has won the race.

The eight-day race, which happens every other year on a different course, began in Ohio this year and consisted of a 1,975-mile road racecourse through seven states. The university’s team crossed the finish line in Wind Cave National Park in South Dakota.

Despite receiving a daily six-minute penalty for not meeting all of the American race regulations, as the team’s car, which is called Aurum, was originally designed for the World Solar Car Challenge in Australia, U-M pulled ahead against 23 other teams of college students.

“We always talk about some of the great races in the past,” says Shihaab Punia, team leader and junior in computer engineering at U-M. “To be part of one that’s been different — to have a completely sunless last two days of the race — to go through something unique, it’s going to add the legacy of Michigan Solar Car.”

To prepare for the race, the team ran two mock races through Michigan’s lower peninsula, and also along the full length of the actual race route.

While nearly 20 students were on the American Solar Challenge race crew, the entire team is made up of more than 100 students from across campus. The team has a 26-year history including five international third-place finishes in the World Solar Challenge.