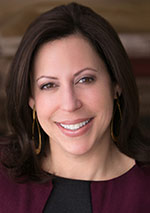 BLOOMFIELD HILL — Pamela Applebaum has been appointed as the new president of Arbor Investment Group Inc., succeeding her father, Eugene Applebaum, the founder and CEO, who will continue his leadership with the company.

Pamela Applebaum, of Bloomfield Hills, has worked at Arbor Investments Group for more than 10 years, most recently as company vice president. She also serves on the boards of several organizations including as a Trustee of Cranbrook Schools and the Beaumont Foundation, and as an officer of the United Jewish Foundation of Metropolitan Detroit.

She has Bachelor of Arts from the University of Michigan and a juris doctor from Georgetown University.

Arbor Investments Group LLC. is a holding company that oversees the Applebaum family’s financial ventures including real estate, private and philanthropic investments. The company was formed in 1998 after Eugene Applebaum sold the drugstore chain he founded, Arbor Drugs, to CVS Inc.