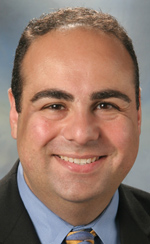 TRIY — ArtServe Michigan, the state’s leading statewide nonprofit arts and cultural advocacy organization, has named Ara Topouzian, president and CEO of the Troy Chamber of Commerce, to its board of directors.

As a strategic leader experienced in both private and public industry sectors, Topouzian is accomplished in the field of economic development for municipalities, with a successful track record of attracting international corporations, as well as retaining small and large businesses. Topouzian currently serves as board chair for the Michigan Economic Developers Association.

“I truly believe in the hard work ArtServe has accomplished and its mission to show how valuable the arts community is within a growing economy,” said Topouzian. “I have firsthand knowledge of ArtServe’s skills and abilities through my involvement with the Kresge Foundation.”

A nationally-recognized Armenian-American musician, Topouzian was awarded a 2012 Kresge Arts in Detroit artist fellowship for his mastery of the Kanun, a Middle Eastern harp.