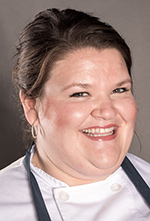 Gabby Milton has been named the new executive chef at the Big Rock Chophouse of Birmingham.

Milton joined the restaurant’s talented culinary team as executive sous chef two years ago. In her new role, Milton will be responsible for overseeing the day-to-day back of the house operations of the restaurant, its private dining facility, The Reserve, and all off-site catering events. She will train and manage a team of 30 while creating and overseeing the restaurant’s award-winning menu.

Milton has more than 10 years of experience in the restaurant and hospitality industry. She began her career as co-owner of the Menu Manager, a Midland-based dinner design studio offering easy meal preparation, catering, kids cooking camps, wholesale food delivery, and other food-related services. She also worked at the  H Hotel in Midland.

Milton, of Ferndale, earned her degree in culinary arts from the Texas Culinary Academy, a Le Cordon Bleu school .