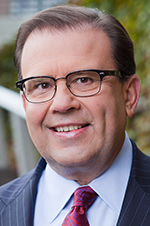 Blue Cross has been a longtime supporter of The Parade Company. In 2015, the nonprofit marked its 32nd year as a major parade sponsor. BCBSM’s Path of Confidence float was unveiled in 2013 and is among the most iconic floats in America’s Thanksgiving Parade. In addition to the float, the nonprofit sponsors the annual VIP Pancake Breakfast and many other Parade Company initiatives.

As president and CEO, Loepp has played a role in modernizing the state’s health care delivery system. In 2011 and 2012, Loepp directed the relocation of 3,000 Blue Cross employees into downtown Detroit and the company now has more than 6,000 workers in the city’s central business district.