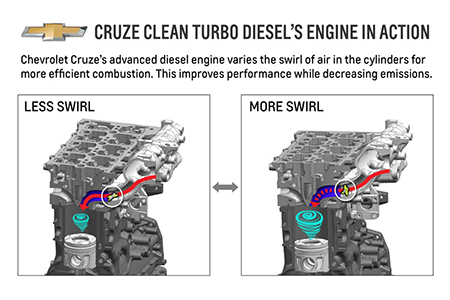 “Variable swirl helps put the ‘clean’ in Cruze Clean Turbo Diesel. It increases the mixture-motion of air and fuel in low-speed, low-load driving, like when you’re doing the commuter crawl to work every day,” said Mike Siegrist, 2.0L turbo diesel assistant chief engineer. “It contributes to Cruze Diesel’s great fuel economy, and helps give drivers the most torque for the least amount of fuel at the lowest emission and noise levels.”

In Cruze’s variable-swirl intake manifold, each cylinder has two separate intake ports, with one of them controlled by a valve. During variable swirl, each throttle valve varies how much it opens to create mixture-motion of air and fuel within each cylinder. General Motors’ Powertrain team devoted countless hours to calibrating the actuator to precisely open and close the valves for optimal performance.

As a result of this and other advanced powertrain technologies, Cruze’s clean diesel engine offers a segment-leading EPA-estimated 46 mpg highway and range of more than 700 miles per tank – better than any non-hybrid or gasoline-powered passenger car vehicle in America.

“All combustion engines have swirl, but having variable swirl is a real difference maker for Cruze’s diesel engine,” Siegrist said. “Ultimately, it means more driving satisfaction with less environmental impact.”