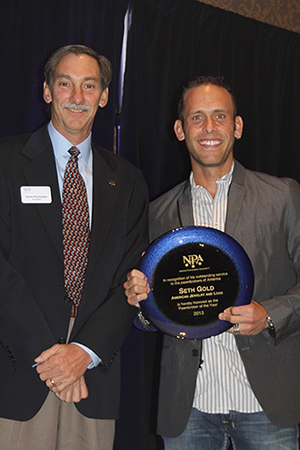 The National Pawnbrokers Association, the leading trade association representing the pawn industry, announced the nomination and unanimous selection of Seth Gold, star of the Tru TV’s hit series Hardcore Pawn, as NPA’s “Pawnbroker of the Year” for 2013.

Seth’s nomination stems from his tireless commitment to supporting the pawn industry, community outreach, bolstering the association’s charitable giving campaigns, and fostering strong relationships with his community and local leaders.

“Seth Gold and the team at American Jewelry & Loan have forged new paths for the pawn industry with the media on a national level as well as within his own local community,” said Kevin Prochaska, president of the National Pawnbrokers Association. “Our industry has benefitted immensely from Seth’s dedication and hard work.”

The award was presented to Seth Gold on July 17, 2013 at Pawn Expo, the only national convention and trade show for the pawn industry hosted at the Cosmopolitan of Las Vegas.

“To be recognized among my peers is truly an unbelievable experience. What’s going on in our lives right now is a wild ride.  I wouldn’t be able to be here today if it weren’t for the support of my family. I anticipate a long future of working alongside them as well as my fellow pawnbrokers to further our industry as a whole,” Seth said upon accepting the award.

The NPA Pawnbroker of the Year Award is presented annually to an NPA member who, through his/her performance, has achieved significant accomplishments nationally for the pawnbroking industry.