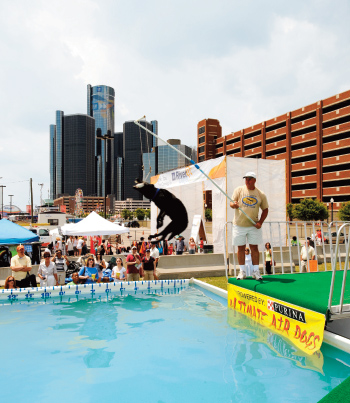 After helping lead the Detroit Tigers to their most recent World Series championship in 1984, former pitcher Milt Wilcox finished his 16-year Major League Baseball career two years later and began working in various manufacturing sales positions. But the thrill of competition eventually inspired him to start Ultimate Air Dogs, which hosts and organizes dock-jumping competitions around the country. “We do close to 50 events a year, mostly over a long weekend, while appearing on ESPN, Good Morning America, and conducting other promotional opportunities,” says Wilcox, president of Ultimate Air Dogs in Huntington Woods, which he co-owns with his son, Brian Wilcox. With Purina as a major sponsor, Wilcox and his son conduct demonstrations and competitions in which owners and their dogs are free to enter. The competitions, which include long-distance and vertical jumping in a 24,000-gallon pool, eventually culminate in division winners (from small to large dogs). “Sometimes we have 100 or more dogs competing, so it gets pretty hectic, but it’s a lot of fun,” Wilcox said during the GM River Days along the Detroit River in June. “It got started with my dog Sparky, who was named after Sparky Anderson (manager of the 1984 Tigers), and it went from there.”