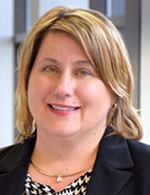 Kramer, from Waterford Township, joined the Human Resources Department in 1997 as a human resources analyst in the classification and compensation unit. She has served in labor relations since January of 2001, most recently as supervisor.

She has a Bachelor of Science degree from Central Michigan University.

Kramer’s appointment will be submitted to the Board of Commissioners General Government Committee for confirmation at its April 13 meeting. It is expected before the full board April 23.