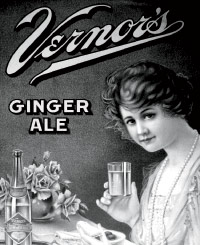 Arbor Drugs
Arbor Drugs opened its doors in Troy in 1974, when founder Eugene Applebaum combined several drug stores under the name. At the time, he owned a handful of pharmacies, including one in Ann Arbor. Because the Ann Arbor store was the best of the bunch, he decided to use the second half of the city’s name for his business.

Barthwell Drugs
When the pharmacy where Sidney Barthwell was employed failed during the Great Depression, Barthwell borrowed $500 from friends to open Barthwell Drugs in 1933. Barthwell Drugs grew to become the largest chain of black-owned drugstores in the United States, with a total of nine stores and three ice-cream parlors. Although the chain no longer exists, the Barthwell legacy remains in Detroit with the establishment the Sidney Barthwell Endowed Scholarship at Wayne State University’s College of Pharmacy.

Burroughs
The Burroughs Adding Machine Company moved to Detroit in 1904 and was once the largest adding-machine company in the United States. William Seward Burroughs founded the company when he invented the Burroughs Registering Accountant in the 1880s; it was the first practical adding-listing machine that printed calculations on paper tapes. The company partnered with the Sperry Corporation in the 80s and is now called Unisys. Although the company is now headquartered in Blue Bell, N.Y., it still occupies the old Burroughs factory and office space in Plymouth, Mich.

B. Siegel Company
B. Siegel Company’s fine-clothing store in Detroit was originally Heyn’s Bazaar, until Benjamin Siegel purchased it in the late 1800s and changed the store’s name. The Woodward Avenue shop was reputed to be the “finest and most complete suit and cloak store” in America, until the company filed for bankruptcy in 1981.

Crowley Milner and Company (Crowley’s)
When Detroit department store Partridge and Blackwell was struggling to stay in business, the Crowley brothers stepped in and took over. In the early 1900s, the store flourished by catering to the city’s affluent clientele, but by the end of the century, Crowley’s had bowed out of the market.

Cunningham’s
Andrew Cunningham opened Cunningham’s Drugs in 1889 and had 11 stores in downtown Detroit when the company was purchased by Economical Drugs owner Nate Shapero in 1931. Cunningham’s was famous for its special promotions and used an elephant symbol to represent their jumbo sodas, sundaes, and photo-print services. The chain’s slogans included “Don’t say drug store â€• say Cunningham’s” and “We’re a drug store — and a whole lot more.”

Federal’s
Steven West’s résumé spans a range of endeavors, from writing five self-help books to committing some major tax evasion. He’s perhaps best-known in the Detroit area for taking over Federal’s department store in the late ’70s. In 1980, Federal’s dissolved.

F&M
Phar-Mor, Drug Emporium, and F&M were once the most powerful bargain drugstore chains in America. The industry was pioneered in Ferndale when Fred and Margaret Cohen opened the first F&M in 1955. The Cohens’ business strategy was selling brand-name products at bargain prices, relying on word-of-mouth advertising, and banking on stock-up shopping popular in more affluent areas. When the Cohens sold the business in 1977, their 9,000-square-foot store was grossing $13 million per year.

Fretter’s
Ollie Fretter opened his first self-titled electronics store in Livonia in the 1950s. He may best be remembered for his commercials, in which he promised, “I’ll give you five pounds of coffee if I can’t beat your best deal.”

Gantos
Lebanese immigrant Theodore Gantos long dreamed of opening his own linen store, and when the devastation of the Great Depression ended, he did just that. With his wife, Haseebie, he opened the first Gantos store in Grand Rapids in 1932. Over the next few decades, the store shifted gears to become a successful women’s-wear boutique before going out of business in 2000.

Grinnell’s Pianos
Once known as the “largest piano factory on the earth,” Grinnell’s Pianos opened its doors in Holly, Mich., in 1913. The company lasted for nearly a century, thanks in part to its quality pianos and to its consistent community involvement hosting annual statewide music festivals.

Harmony House
Carl Thom opened the first Harmony House music store in Hazel Park in 1947. Known for its superb selection of Detroit music, the chain grew to 38 stores before finally closing in 2002.

Highland Superstores
In 1933, Harry Mondry founded the first Highland Appliance Store, named for its location in Highland Park. The company had a dramatic rise and fall in its time, expanding to three states before finally liquidating in 1993.

Himelhoch’s
The first Himelhoch’s clothing store opened on Washington Boulevard in downtown Detroit in 1907. Fifty years later, the chain had stretched across the country, and even to Paris. But in 1977, the company filed for bankruptcy and closed. Its original location on Washington has been preserved as a historic landmark.

Hudson’s
The J.L. Hudson Company was founded in 1881 by Joseph L. Hudson. The 29-story flagship store, located at 1206 Woodward in downtown Detroit, was the world’s tallest department store throughout most of the 20th century, with 706 fitting rooms, 68 elevators, 51 display windows, five restaurants, a fine-art gallery, and a wine department. After many changes in the retail sector, the chain was eventually folded into Macy’s.

Hughes & Hatcher
In 1910, Fred Hughes and Leslie Hatcher opened their clothing store in downtown Detroit, and it soon became the top name in gentlemen’s fine apparel. Aside from its stupendously stylish suits, Hughes & Hatcher was known for having the largest display windows in town.

Jacobson’s
In 1838, the first Jacobson’s store opened in Reed City, Mich. The store catered to the fashion needs of upscale Michigan clientele, and eventually expanded to Florida and other states. The store is still profitable in Florida, but the Michigan stores, after more than 150 years, remain closed.

Joshua Doore Furniture
In 1973, Harvey Leach opened the doors to Joshua Doore and, for years, drew in customers with the charming slogan “You’ve got an uncle in the furniture business.” A few years later, amid the company’s transformation into Uncle Robinson Furniture, Leach was found dead in the trunk of his car, allegedly as a result of financial challenges.

Kern’s
Where the Compuware building stands in downtown Detroit today once stood another grand retailer of the city’s golden era, Kern’s Department Store. Kern’s opened in 1900 and competed with J.L. Hudson’s until closing in 1959. After much restoration, the famous Kern’s clock was rededicated by Compuware in 2003.

Kinsel Drug Store
The next time you need a remedy for a late-night cough, you can thank Edward C. Kinsel, who opened Detroit’s first 24-hour drugstore. Kinsel’s opened in 1894 and offered patrons everything from cold remedies to cold cuts.

Kline’s
Eugene B. Kline founded Kline’s women’s fashion store in 1911. The chic-looking store on Woodward Avenue was called the most modern store in the country in 1940.

Merchant of Vino
Founded in 1974, Merchant of Vino was well known for its fine wine and gourmet foods. Although Eddie Jonna eventually sold his popular chain to Whole Foods Co., his sons Marc and Matthew picked up where their father left off, opening the state-of-the-art Plum Markets now seen around metro Detroit.

Perry’s Drug Store
Jack A. Robinson founded the hugely successful Perry’s Drug Store chain, which was taken over by Rite-Aid in the mid-’90s. The first Perry’s store opened in Pontiac in 1957, named for its location on Perry Street.

Pfeiffer Brewing Company
Conrad Pfeiffer began brewing his own beer in 1882. His Art Deco red-brick brewery was built between Beaufait and Bellevue avenues on the east side of Detroit, complete with a stable and hospitality area that offered tours, products for sale, and a beer garden. Pfeiffer Brewing Company began producing its olive-drab cans with black lettering for the government during World War II, soon after it began selling its yellow Johnny Fifer cans to the public.

R.H. Fyfe and Company
Detroit was once home to the largest shoe store in the world. Fyfe’s opened in 1865 and, by 1919, it had expanded to include 10 floors of shoes and service areas, as well as a miniature-golf course. After closing, the headquarters at Woodward and Adams was converted into residential lofts.

Sam’s Jams
Opened in 1979, Sam’s Jams was a hip Ferndale record shop where customers could always find rare and vintage tunes. Sam’s frequently hosted album signings with popular and alternative bands of the day. But much to the dismay of the local underground music community, Sam’s closed its doors in 1993.

Sanders
Frederick Sanders opened his first retail shop in downtown Detroit on June 17, 1875. At one time, Sanders had over 57 stores around town selling an assortment of candy, fudge toppings, and baked goods. Sanders sold his first Ice Cream Soda in 1876, when he substituted ice cream for the sweet cream used in his Sweet Cream Soda.

Sebastian S. Kresge/Kmart
With his humble beginnings, historic philanthropist Sebastian S. Kresge likely couldn’t have imagined that the city of Detroit would turn his modest five-and-dime store into the gargantuan enterprise it became. S.S. Kresge Co. opened in Detroit in 1899, and later expanded into Kmart Corporation, before merging with Sears, Roebuck & Co.

Sibley’s Shoes
Aaron Ross and Norm Rosenfeld opened the first Sibley’s shoe store in Detroit in 1920 and soon expanded to various locations throughout Michigan and Ohio. Headquartered in the Fox Building and, for a time, the Renaissance Center, the chain was finally dismantled in 2003.

Stroh’s
In 1850, Bernhard Stroh established what would become a Detroit institution, then referred to as Lion’s Head brewery. During Prohibition, the company stayed afloat by producing ice cream and “near beer” and selling it in grocery stores and ice-cream parlors (Stroh’s Ice Cream can still be found today). With its headquarters at Grand Park Centre near Grand Circus Park, Stroh’s was family-owned and -operated for more than 145 years.

Thorn Apple Valley
After miraculously escaping from a Polish concentration camp during World War II, Henry Dorfman immigrated into the United States and opened his own butcher shop in Detroit in 1949. The small company, originally called Frederick Packing Company, expanded nationwide and was renamed Thorn Apple Valley in 1984.

Towne Club
In the mid 1960s, Harold Samhat began selling Towne Club soda at various “pop centers” around Detroit. Towne Club, sold in wooden crates with 24 glass bottles in each, was more affordable than Coke or Pepsi and was famous for its wide variety of flavors.

Twin Pines Dairy Farm
It’s been a long time since fresh milk, cream, and cottage cheese were delivered right to your milk chute, but for almost 20 years, Twin Pines was perhaps Detroit’s finest creamery. Before the emergence of convenience stores, Twin Pines was such a success that it even had its own children’s television show, Milky’s Party Time, from 1950 to 1967.

Vernors
Legend has it that Vernors ginger ale was created in 1866 when Detroit pharmacist James Vernor returned home from the Civil War and found that the syrup he’d created and stored for four years had transformed into a “deliciously different” drink. Combined with a scoop of vanilla ice cream (preferably Stroh’s), the distinctly Detroit soda created a Midwest delicacy: the “Boston cooler,” believed to be named after Detroit’s Boston Boulevard.

Winkelman’s
The first Winkelman’s store was built in Detroit in 1928. The founders, brothers Isadore and Leon Winkelman, were born and raised in the Upper Peninsula, but fell in love with the city and stayed to open their successful clothing stores.

Woolworth’s
Perhaps the best-known of the old five-and-dimes was Woolworth’s, which expanded into a larger discount store chain and thrived for most of the 20th century. After the store’s demise in the ’80s, the company broke off into several parts, including a sportswear division now known as Foot Locker.