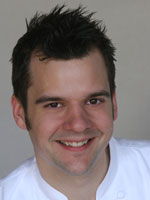 As the 2014 Chef of the Year, Sayes will now move on to compete in the American Culinary Federation’s Central Regional Competition. Additionally, the venue of the annual COTY award winner is home to event the following year, so The Townsend Hotel will proudly host the 2015 awards gala.

Executive chef at The Townsend Hotel since December 2012, Sayes is a native of the metro Detroit, and received his formal training at the Culinary Studies Institute located at Oakland Community College in Farmington Hills.  In August 2012, he became a Certified Executive Chef through the American Culinary Federation.